Half of fashion duo Prime Obsession, Keneilwe Mothoa, better known as Nei, has just moved into an apartment of her own after sharing a two-bedroom loft with her business partner Shelley Mokoena at popular downtown establishment 1 Eloff for a year.

The pair decided to flee the comfort of their twosome in search of more light, room for love and a little space to grow. “We didn’t really want to split, but we kind of felt it was time to find places of our own. It’s just part of growing up, I guess.”

Nei (25), a professional interior designer of three years chose the on-the-edge-of-gentrification neighbourhood of Jeppestown just beside Maboneng as the locale of her new home.

“I’m from the South; all my life has been really quiet and I got tired of that. I wanted to move into the city to chase the noise, the life and the hustle and bustle. I feel alive in the city. I left home with nothing, not even my mattress, so I’m basically starting from scratch.”

The newly renovated Rand Daily Mail House in which Nei’s new apartment is situated was once home to the famous newspaper, which was controversially closed in 1985 due to its outspoken anti-apartheid stance in the midst of a massive clampdown on activists by the security forces. The Rand Daily Mail famously broke the news of the apartheid state's Muldergate Scandal in 1979 and more poignantly, exposed the truth about the death in custody of Steve Biko, in 1977. It is poetic, then, that a woman best known for complicating the visual narrative of representation through local fashion, should live in a building so heavy with history. 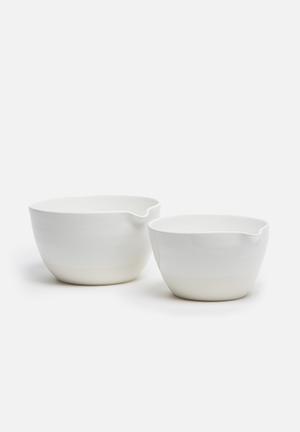 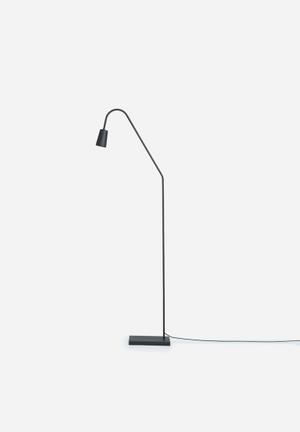 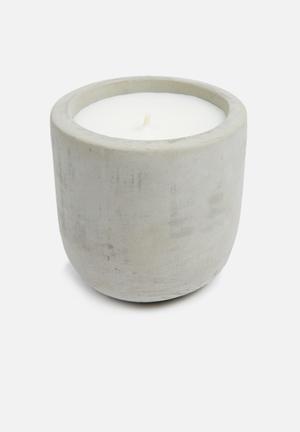 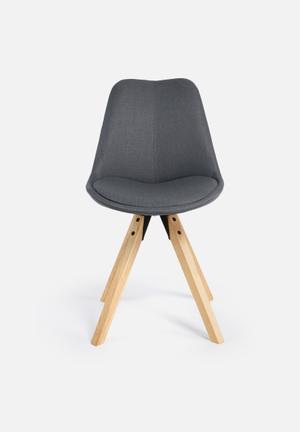 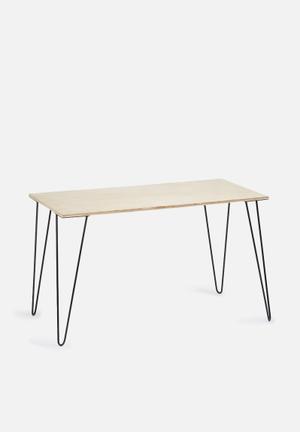 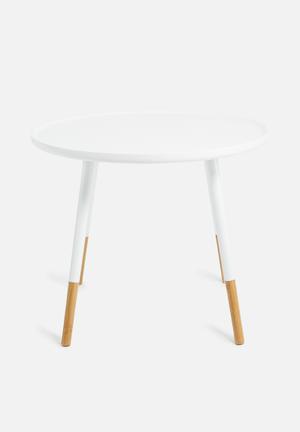 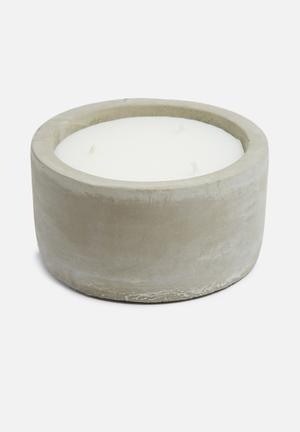 “My business specilises in selling thrifted clothing. We go into neighbourhoods and places people don’t usually want to go, in search of gems and hidden treasures,” she tells me in conversation, “people worry too much about searching for the new, when there is so much quality to be found in the places people are scared to look.”

She’s been here just over a week, she tells me over a steaming cup of Rooibos in a very chic clear glass mug; evident from the boxes she’s strategically hidden from view. The light from her large industrial window streams warmly across two plants in glass vases at the foot of the staircase, and gently across her face as she giggles shyly about the emptiness of her new home.

“I’m really into DIY lately,” she says, gesturing at the matching shelf and coffee table set she built herself. “I went to Builders Warehouse, bought the steel and had the pine planks cut. I asked around at 1 Eloff and found a guy who could weld and he did the corners and joints for me, it’s really lucky that the pieces match my new staircase.” 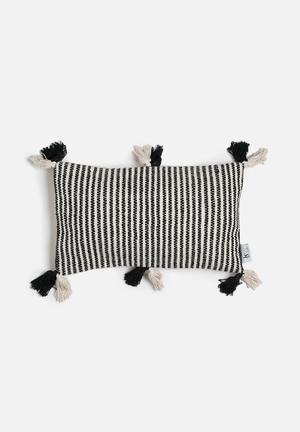 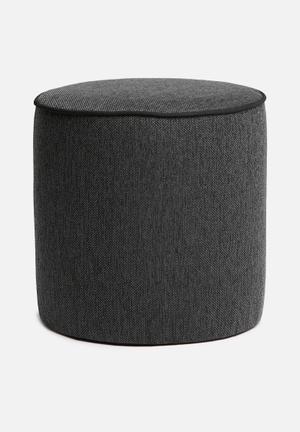 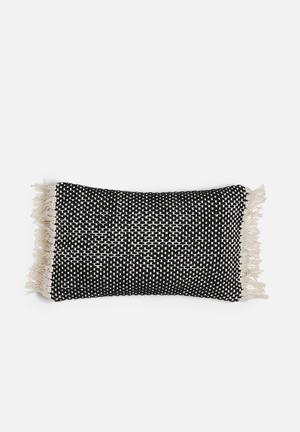 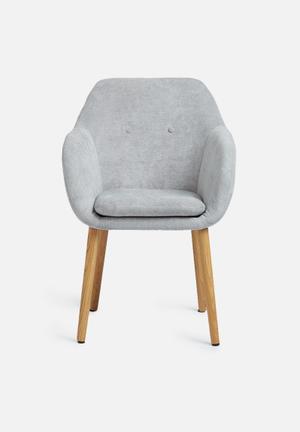 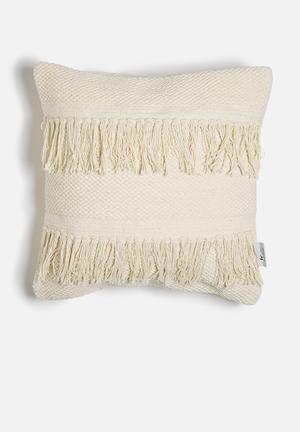 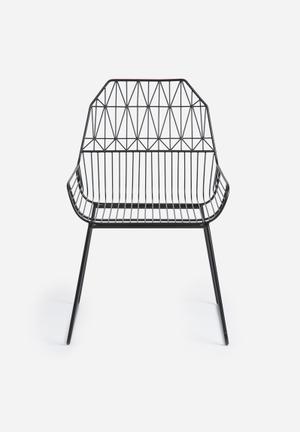 The bed itself is low to the ground, and peeking out from beneath the white sheets, charcoal throw and pillows in all 50 shades of grey, are salvaged shipping crates. “I wasn’t going to carry a bed-base up those stairs, and they are so expensive, so I went to a construction site and asked for a few of their wooden palettes, laid four of them flat side by side, and threw my mattress on top.” The result is a warm, industrial finish that is soft, stylish and extremely cost effective. “Being a young entrepreneur means I watch my pennies carefully. I look for deals and savings wherever I can, but will never compromise on style.” 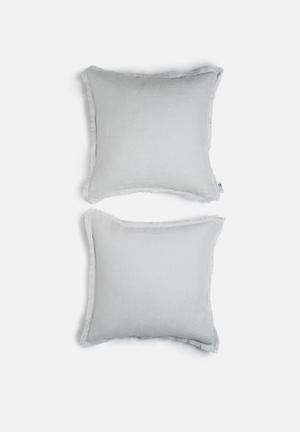 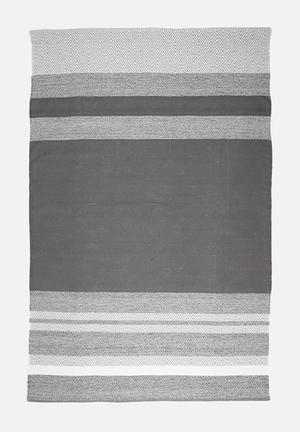 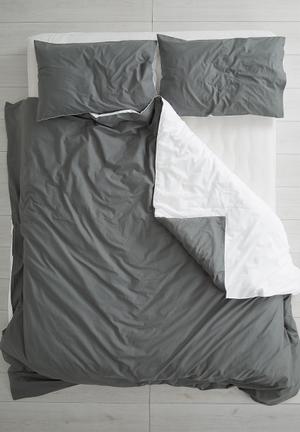 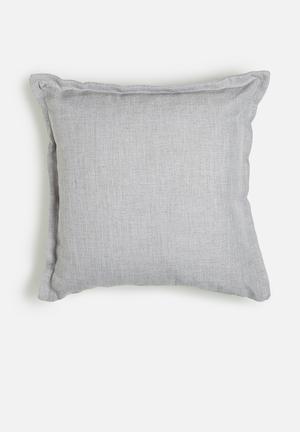 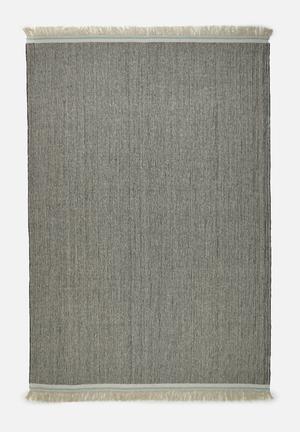 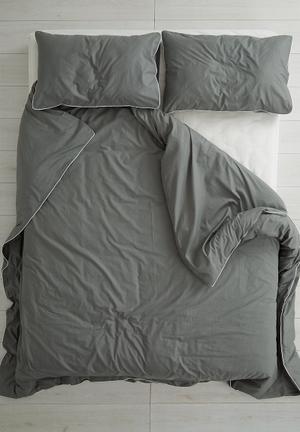 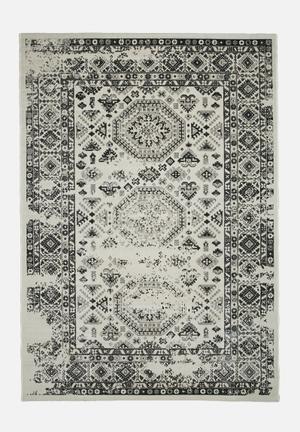 The details in Nei’s home reflect the minimalist blocking technique she uses to layer her clothing on Instagram (@keneilwe_mothoa), where she has amassed a large following thanks to her edgy fashion choices, dynamic poses lovingly referred to as ‘hieroglyphs’, and handmade avant-garde garments.

“I try to select fewer, high quality pieces to decorate my space, the same with my cupboard. I wanted to be an architect but interior décor feels like a blend between the seriousness of architecture and the playfulness of fashion. As much as I can, I try to bring what I’ve learnt in the work place into my daily life.”

Hints of color accent the space, bringing a whimsical element to the otherwise neutrally toned home. A large painting in shades of marigold, salmon and tangerine, leans against the center of the biggest wall, proudly watching over the living space where Nei exclaims she “loves to have people over to eat and drink wine.” The painting, an abstract portrait of the lady herself, was a gift; “My boyfriend Lou commissioned one of my really good friends Sash who is a multi-talented artist and fashion designer to do this painting for my birthday.”

“My new place is a work in progress, but I think it’s a great canvas to start a new chapter in my life.”