The Pope of Pop Art, or Pop Art via parody – who’s for you?

Opinions are like kittens. Someone is always giving one away. So it didn’t surprise us in the slightest when our drop of Pop Art pieces sparked some debate over the merits of two of history’s most prominent Pop artists, Andy Warhol and Roy Lichtenstein.

It was clear that we needed schooling in art appreciation, so we asked our art buyer, Taryn Joffe, and her well-qualified bestie, Frith Carlisle, to share their thoughts with us.

Frith completed a Bachelor of Arts, in Fine Arts, at Michealis School of Fine Art – so yes, she sure knows those arts. Next, she ran away to London, where she has worked as an art technician for Sotheby’s Auction House and a researcher and archive assistant for Condé Nast. She currently freelances as an archivist for Trunk Archive.

Superbalist art buyer Taryn studied at The University of Cape Town and has an undergrad degree in Film Studies and Art History and an honours degree in Film Studies. She was a founding member of The Good Film Society, worked at Culture Urban+Contemporary Art Gallery and is the assistant editor of Go Social Film Magazine. She went to the 2014 Cannes Film Festival with the NFVF and will be returning to Cannes this month on an internship programme.

Read on to upgrade your grey matter with the help of this pair of art anoraks.

‘Don't pay any attention to what they write about you. Just measure it in inches.’ - Andy Warhol

While Lichtenstein was trying to understand popular culture through high art, Warhol saw no reason for the two to be mutually exclusive, for their paths to stray further and further apart. He didn’t merely create new art, he created a new context through which art could be understood and simultaneously, a context through which art, culture, celebrity and society can all be re-understood and their interconnectedness explored.

After the elitist aims of the Abstract Expressionists and the shifting American cultural landscape of the 50s, Pop Artists were essentially looking for ways to “keep it real”, reconnect with a wider audience and society, bridge and understand the divide that had emerged between mass or popular culture and “high art”, always with a pinch a salt. A Brillo can, a comic strip, the aesthetic of mass marketing, tabloids, newspapers and celebrity culture; Pop Artists were attempting to come to terms with the questions of how and why and which images were reaching people, and what that meant.

Lichtenstein’s painstaking dot paintings suggest a concern with a kind of “quantity vs. quality” argument. I think that this was a primary concern of many artists of the time. There was felt to be some implicit loss of integrity to an image or object replicated or mass-produced many times – a cheapening.

Warhol didn’t share this worry. He was fascinated by how the world represented itself – how an image or object changed physically and conceptually as it was reproduced, repurposed and re-contextualised. Warhol saw meaning in that process. He had grasped something about the relationship between “highly visible” and “highly valuable” that few artists of his generation, or any previous generation, did.

Warhol’s cool gaze seemed to view objects and subjects with wide reach as significant regardless of their banality or “real life” purpose, why was a Brillo Box (Brillo Box), something we looked at and interacted with everyday, something mass-produced for the masses, not just as worthy of our consideration, and just as iconic a symbol of our world, as a painting of Jesus Christ? Any object or subject could resonate with him with equal significance, and Warhol had a rare gift for being able to impart that on an audience, but always without moralising, just a mirror to our true nature as a mass consciousness. A tin of Campbell’s soup (Campbell's Soup Can) could fascinate and resonate with him just as much as a glamorous It girl like Edie Sedgwick.

In his enormous body of work, often rendered in commercial print-mediums, monochrome candy colours and a sort of shallowness that is deceivingly only surface-deep, are tyrants (Mao Zedong), stars like Marilyn Monroe (Shot Light Blue Marilyn, 1964) and Debbie Harry (Debbie) politicians and their wives (Jackie), playboys and royals, events like the race riots of the American Civil Rights movement and explosions and car crashes (Green Car Crash), almost like an abstracted selection taken from the days newspapers.

Many of these subjects interested him perhaps to a large extent simply because they were “famous”, had a wide reach, a notoriety. Although his work can be deemed shallow or kitsch, these explorations of what was in the mass eye show his understanding of the cult(ure) of celebrity and the role it would come to play in our future.

Warhol understood there was now a quantifiable value in fame itself, something he used his art to achieve for himself. He was, to use that overblown and very grown-up word, a visionary.

Nothing was the same after Warhol. He didn't just reflect his time, he helped shape the future. Warhol said “They always say time changes things, but you actually have to change them yourself.” and he did. 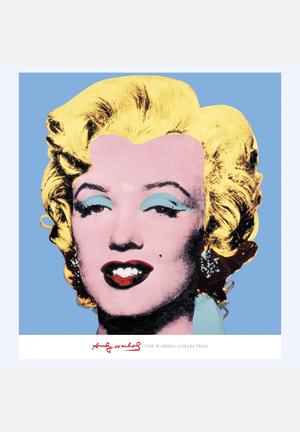 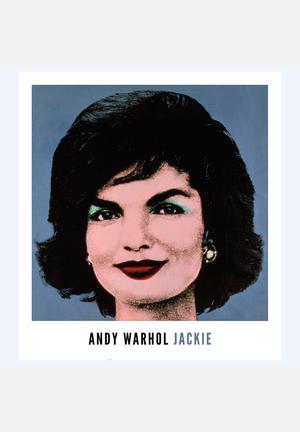 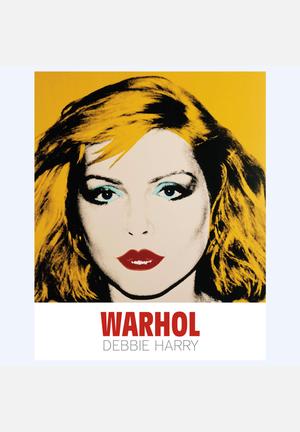 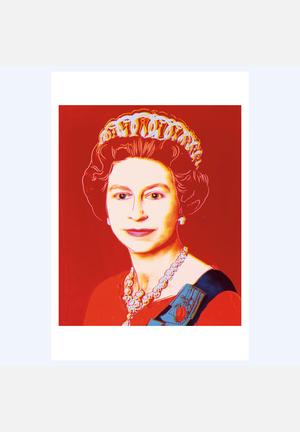 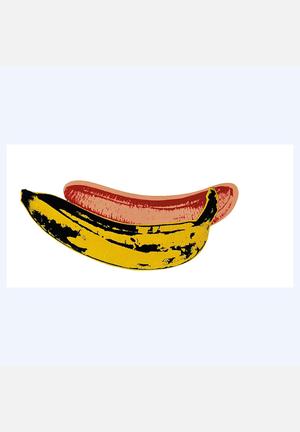 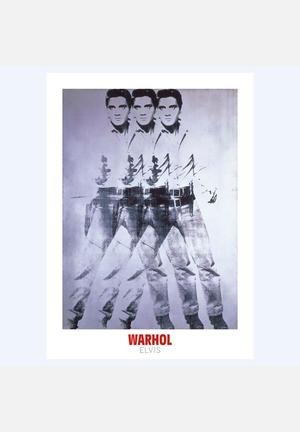 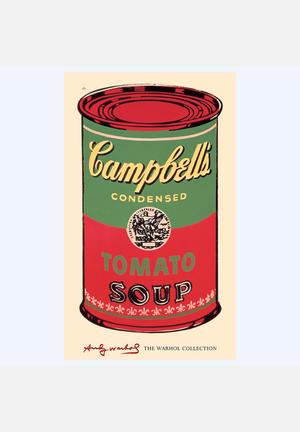 “My work isn't about form. It's about seeing. I'm excited about seeing things, and I'm interested in the way I think other people see things.”– Roy Lichtenstein

Considering the Pop Art of Andy Warhol and Roy Lichtenstein comparatively to decide which I am more drawn towards is a challenging one. While Warhol is forever entombed in the burial ground of mainstream sub-psyche with his banana cover for The Velvet Underground and Monroe and the polaroids of iconic figures, Lichtenstein is not necessarily less influential. All such contrasts and likenings, however, are too subjective, and pointless, for the depreciative and lessening nature they have.

In an anecdote by Janis Hendrickson, she recounts an instance in 1961 when gallery owner Leo Castelli was presented with the comic art of Lichtenstein and Warhol respectively. Having been previously unacquainted, it was interesting that the two artists should be working within the same genre at the same time. Lichtenstein’s work, however, was accepted by Castelli over Warhol’s, and Warhol claimed to know the reason. He concluded that his comics were not as provocative and told art curator Henry Geldzahler he was going to stop painting comic strips. Furthermore, he had just been shown Lichtenstein’s Ben-Day dots and had thought, “‘Oh, why couldn’t I have thought of that?”

“Right then,” he said, “I decided that Roy was doing comics so well, that I would just stop comics altogether and go in other directions where I could come out first – like quantity and repetition.” This characterises Warhol’s irreverence and more thoughtless ‘take-and-say-this-is-my-art’ personality, as well as his consciously superficial regard towards cultural appropriation. “Art” Warhol states, “is what you can get away with” and this may be compounded by Warhol asserting that “If you want to know more about Andy Warhol, just look at the surface of my paintings and films and me, and there I am. There’s nothing behind it.”

Lichtenstein’s stylistic approach to comics was arguably pre-emptive and saw the artist assimilate commercial media into culturally saturated artworks, which informed basic principles of the Pop Art movement and offered a remythification of mainstream imagery. Aesthetically, I favour his use of industrial Ben-Day dots, which he used extensively to build images, formalising this mechanized mode of making art. Whilst impersonality was a kind of insurrection against “high art” for these Pop artists, Lichtenstein maintained “Personally, I feel that in my own work I wanted to look programmed or impersonal but I don’t really believe I am being impersonal when I do it. And I don’t think you could do this.” It is the emotional intensification of his work, however, which makes me most passionate about him. Lichtenstein was also using direct messages through the use of text to communicate key points in American society, which sees the directness of language thrive in his work. I particularly enjoy the sardonic balloon texts of his early work (Mr. Bellamy) as well as the unspoken thoughts of his bereft female characters in his comic strips.

Lichtenstein’s romantic comic strips are the most provocative for me because of how successfully each image renders emotion and brutality, as well as compositional density. This is aided through considerable image cropping, focusing the viewer on the cliché or histrionics which the content signals. These clichés come in the form of prototypes of beautiful women who are made vulnerable by their pain caused by romantic love. Referred to by Hendrickson as “the waiting and crying girls” these women are seen in all-too familiar instances of distress.

In The Kiss we see a passionate but momentary embrace between a girl and an Air Force Pilot who will have to leave seconds later as his plane awaits him in the background. In Kiss V, yet another girl finds herself in the arms of a man whose shoulder she weeps on suggesting turmoil rather than affirmation of the relationship. In Drowning Girl, the character is literally drowning in her own tears, presumably caused by the hurt which Brad has caused her, which amass into a perilous wave. M-Maybe depicts the character anxiously waiting in vain for a man who is never going to show up - likely the kind of man who will always disappoint you and for whom you will make excuses. Finally, Hopeless frames its subject left in despair, only to come to terms with unreturned love.

The way in which Lichtenstein conceives of love and the trauma of relationships ultimately sells us an image upon which one may project one’s own illusions of love and experience of heartbreak, for this is no ordinary love, this love is unrequited. What makes these images all the more powerful for me is that, unlike his many humour-filled and satirical artworks, these images may be taken seriously as great epics, and if they are funny, which is also great, it is only because we may ironically learn not to take love too seriously. Essentially, if they disaffirm the myths they portray, it is for they are contrived to ironise and provoke questions about our perceptual values. 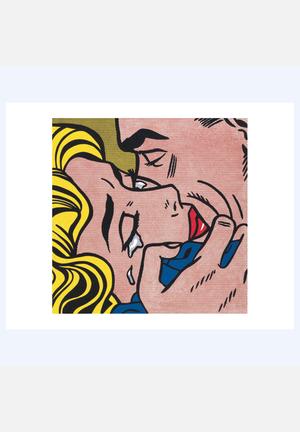 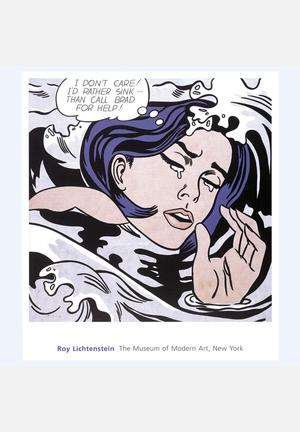 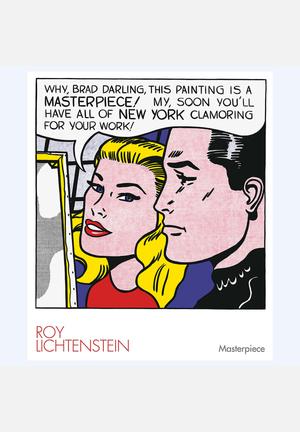 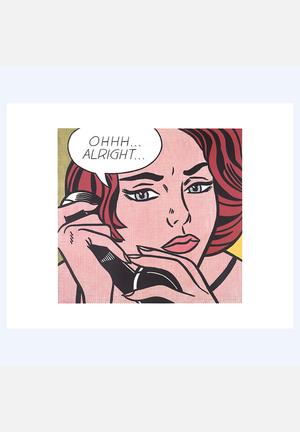