Superbalist uses cookies for the best shopping experience. Cookies may have been disabled due to an error. Manage your cookie settings in the browser settings.
GOT IT
22.09.2016

The brand with the three stripes unveils its latest cultural icon, adidas Gazelle

“Steal from history. Nothing is sacred.”

This is from digital artist Doug Abraham, whose artfully re-mixed visuals for adidas’ new campaign celebrates one of the footwear brand’s most iconic silhouettes, Gazelle. 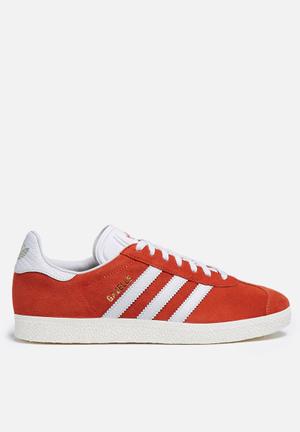 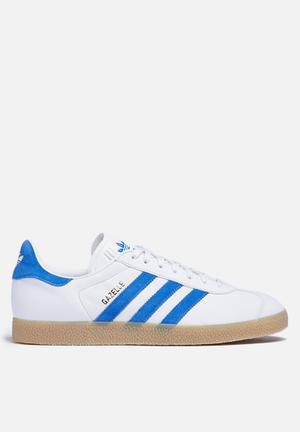 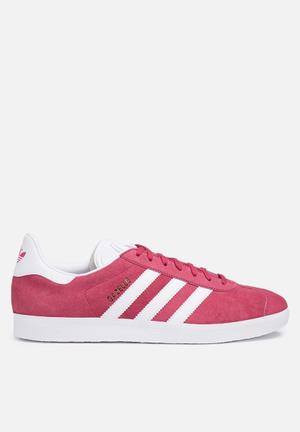 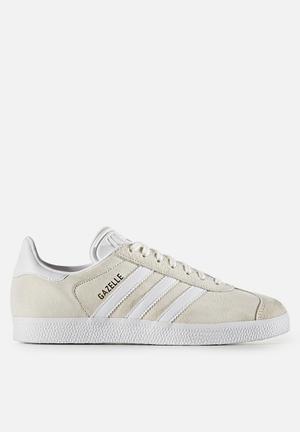 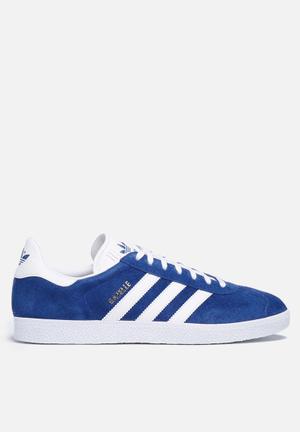 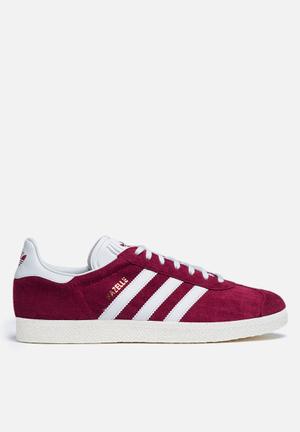 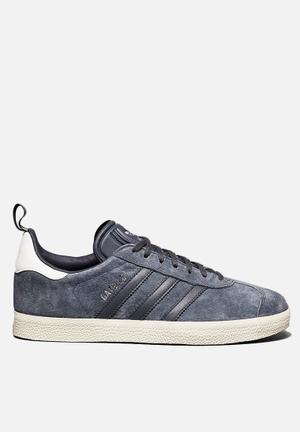 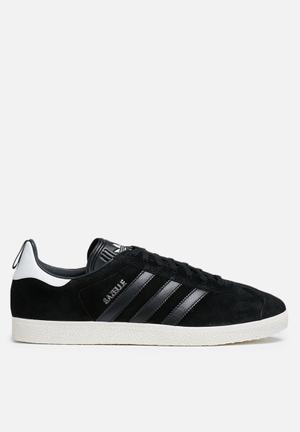 Whether borrowing from their past to create the future, NMD, or allowing the current generation of style tribes to interpret throwback styles, like the Stan Smith and the Superstar, adidas Originals has consistently captured the zeitgeist.

Now it’s the Gazelle’s turn to step into the present, dominate street style and be adopted by contemporary style innovators. Because in this great future, we can’t forget the past. Looking back, Gazelle has been worn by disparate groups, all of which developed a unique affinity for the shoe, ultimately making it their own: the likes of the Casuals, Brit poppers, grunge slackers, dancehall and reggae skankers, and celebrities like Mick Jagger, Michael Jackson, and off-duty Kate Moss.

As the updated classic lands on SA shores, adidas Originals references the Kate Moss x Doug Abraham collaboration, approaching South African style squads and visual artists to team up – and take pictures. The Way of Us caught up with the various players and asked them to unpack the project for us.

By now you should be familiar with the name Lulama Wolf, whom we’ve featured several times in the past, probably because she’s such a dream to work with. Lindiwe is new to The Way of Us, and describes herself as a simple girl from Bloemfontein with a passion for creating things and then posting about it, a credo we can get behind. Then Dustin van Wyk is also a maker of things, and was asked to collaborate on this project because of his handmade collages that focus one re-contextualizing archival footage into new digital platforms.

A fan of the Gazelle’s simplicity and timeless design, Lindiwe says that by incorporating the shoe into her simple, minimalist aesthetic it makes for even more classic looks.

“For a classic to be called a ‘classic’ it must have the ability to fit in with each different fashion era that arises, and still have relevance. What I love is that it can be characterised in so many different ways. That different people can create different styles.”

“A classic is anything that had stood the test of time,” adds Lulama. “A particular style that has managed to reinvent itself over a period time and stayed relevant.”

On the topic of reinvention, Lulama goes on to say that collaboration is better than working alone, and that we’re able to do more when combining what we’ve learned with the experience of others.

“The collaboration process is one I’m very delicate with, because the same vision I have of what I've created will be handed over to someone who's just as creative as me, if not better. Trust is the word here.”

“The process was interesting due to the massive limitations,” says Dustin. “That’s where the fun came from. You’re put inside this creative box and have only a few elements to use, so it kind of forces you to re-think your process and how to use these resources.”

Having never been tied to one particular sub-culture, Dustin feels that the internet has turned us all into Frankenstein’s monster: we’re now a combination of various influences from our past and present.

“It all depends on what music, visuals and media you gravitate towards to in a specific period of your life.”

More than a photographer, Aart Verrips uses visuals to tell stories that focus firmly on the youth. As an artist, he consistently tries to find new and innovative ways to capture timeless themes. This saw the Gazelle sneaker, a classic, communicated in a modern narrative.

Having never tried to slot into any existing style tribe, FAKA have been the target of name-calling, nonetheless.

“At some point we were both wrongfully labelled ‘Amabhujwa’ – which isn’t really a bad thing, because Amabhujwa are one of the many black subcultures that consistently challenge gender stereotypes in every way.”

As an agitator inventing new spaces in which alternate realities exist, Aart believes that unless you’re posing questions, you’re merely making a noise.

“What I do has intention. It challenges gender, popular conventions in style and what we define as beauty.”

Because a classic will always evolve without necessarily changing itself, FAKA found it easy to incorporate the Gazelle into their aesthetic.

“It’s quite a versatile shoe with subtle luxe finishes, and because it’s a classic it's easy to interpret in various ways that fit into our general New Horizons aesthetic.”

FAKA think it’s cute how they were both born in 1991 and that this Gazelle is based on that 90s version. And although they don’t really interpret trends according to eras anymore, their silhouettes are now much more fluid, they still have an eye on that 90s Generations styling.

“A classic is something timeless,” says Aart. “It has relevance, as well as aesthetic plus cultural value, no matter the decade.”

After receiving his photographs from FAKA, Aart found that they flowed easily into the collage he created, and then took this further with an animated version. How? By “creating an illusion of a kaleidoscope. I wanted to incorporate elements of heritage that speak about people as individuals and as a group, coming together to create art based on background.”

An image-maker, observer and creator pairs up with a boxer, personal trainer and fitness enthusiast. An odd couple, sure, but perhaps Gabrielle Kannemeyer and Clint Sylvester are the perfect pair to interpret the Gazelle, a sneaker with both sports and fashion roots.

Motion designer and co-founder of Bubblegum Club, Lex Trickett got into art via skateboarding, and after he didn’t progress as quickly as he would’ve liked to, turned to the subculture’s graphics, ploughing through his father’s epic magazine collection and wallpapering his bedroom in images out of Thrasher magazine.

Gabbi thinks subculture is a dirty word. “I wouldn’t say that I identify with or have ever embedded myself in any specific subculture, and I try not to isolate and identify them. Things are changing, and everyone’s informed by so many different sources now.”

Instead, she prefers the longevity of something that’s stood the test of time. Simply put, a classic.

“It needs to exist somewhere between the ages, highlighting a relationship with the past and the present while still being functional and aesthetically relevant. Gazelle meets my requirements for timelessness. I’m a fan of a thing that can be both bold and simple at the same time.”

“I actually appropriate sportswear in my everyday attire, so whether I’m at gym or not I’m usually wearing technical fabrics and a mixture of street and sportswear.”

Deciding to create a photo series within the spaces that they both exist, the couple chose Clint’s Grassy Park neighbourhood as their location, keeping the aesthetic clean and simple. To push the theme of collaboration, they enlisted good friend Travys Owen to photograph the looks.

“The images looked amazing so the trick was finding a good balance between the two and integrating all the elements without making it too overpowering,” says Lex. “The concept of Ubuntu differs for a lot of people, but for me, it relates to how you become who you surround yourself with, and recognising otherness in others. It’s finding that connection and humanness between like-minded individuals.”

But is there anything sacred when it comes to reinterpreting other people’s work?

“From an art perspective, I think nothing is sacred. Image culture nowadays is crazy re-appropiation, with very minimal adaptation – just look at how memes are generated. From a product design perspective I think that staying true to the soul of the design, but perhaps improving functionality and form, is key.”

A pared-back, low-profile style that was originally introduced in 1963 as an indoor soccer trainer, the adidas Originals Gazelle is a modern classic. From the vintage suede upper to serrated leather stripes, the updated style has stays true to the original design, taking retro inspiration right into the future. The colourways were initially there to denote the shoe’s performance – Gazelle Blue for training and Gazelle Red for handball – we've been promised a total of 53 colourways that will be released throughout the year. The clincher? They're available exclusively online at Superbalist.com